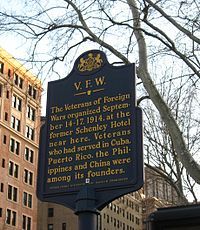 Pennsylvania played a critical role in establishing the VFW of the United States. A framed flag at our headquarters in Harrisburg historically shows that Post #1 of the forerunner of the VFW—the American Veterans of Foreign Service—started in Philadelphia. The American Veterans of Philippine and China Wars was created in Philadelphia, which later merged with the Pennsylvania AVFS. In western PA, the Philippine War Veterans organization has chapters in Pittsburgh and Altoona. In 1903, these groups merged to form the AVFS, which merged with the Ohio AVFS in 1905, creating the foundation of today’s VFW.

Since then, our Department has set the pace for VFW growth and program development that drives our advocacy, camaraderie, support and outreach efforts. In 1999, we proudly celebrated the VFW’s 100th anniversary. We continue to show that our "Honoring the Dead by Helping the Living” mission is more important today than ever. In June 2019, the Department holds its 100th consecutive State Convention.

The PA Department leads the nation with about 60,000 combat vets in our ranks who belong to 400 local Posts. Our membership consists of veterans from all war eras including Operations Iraqi Freedom, Enduring Freedom and New Dawn, and combat operations dating back to World War II. Veterans of UN peacekeeping service and other service which earned hostile fire or imminent danger pay also belong. Many members still serve on Active or Reserve/Guard status. Today, just as veterans from earlier wars led the VFW into the modern era, Vietnam veterans hold the majority of Department and Post leadership positions. Many younger veterans are stepping forward to serve in leadership roles.

We are among the national leaders in VFW program activity and funds raised to support VFW and community projects. This success shows we are first and foremost a service organization. Of course, the VFW is quick to respond to needs of veterans, their families and military families. We know how to react to the many challenges facing military families and transitioning troops because we’ve "been there.”
PA VFW organizations annually donate more than $15 million combined in financial donations and volunteer community service. The State VFW, through its Veterans Service Officers, connected veterans with $30 million in federal benefits last year through free assistance, made possible in part by a PA Act 66 grant. Nationally, the VFW helped veterans receive more than $4 billion in federal benefits last year and have provided 1,287 student veterans with scholarships totaling $5.7 million.
The generosity of the VFW and its Auxiliary also extends beyond our veterans and military families. VFW Posts contribute millions of dollars and thousands of hours of community service each year. VFW contributions improve entire communities through beautification projects; donations for public safety, building memorials, human service charity donations, holiday events for children, student scholarships, disaster relief drives; patriotic events honoring veterans and active troops; and many more programs. VFW members visit schools, work with scouting programs and hold "living history” programs to develop patriotism and civic responsibility.
Pennsylvania is indeed a better place to live thanks to the VFW. And, no one does more for veterans than the VFW.
2022-2023 National Commander in Chief Photo: Click Here
See VFW Family Tree charting the organizational stages
VFW National Magazine Article Commemorating 100th Anniversary of the First Official VFW Convention
VFW Centennial Program Booklet– Handed out at the 100th Anniversary Event of the first VFW Convention held on the University of Pittsburgh campus on September 16, 1914 (the roots of the VFW date back to 1899 when groups first began working together before formally created the VFW in 1914)

Thank you to the following who support our Veterans. Click on the logo(s) below for more information.